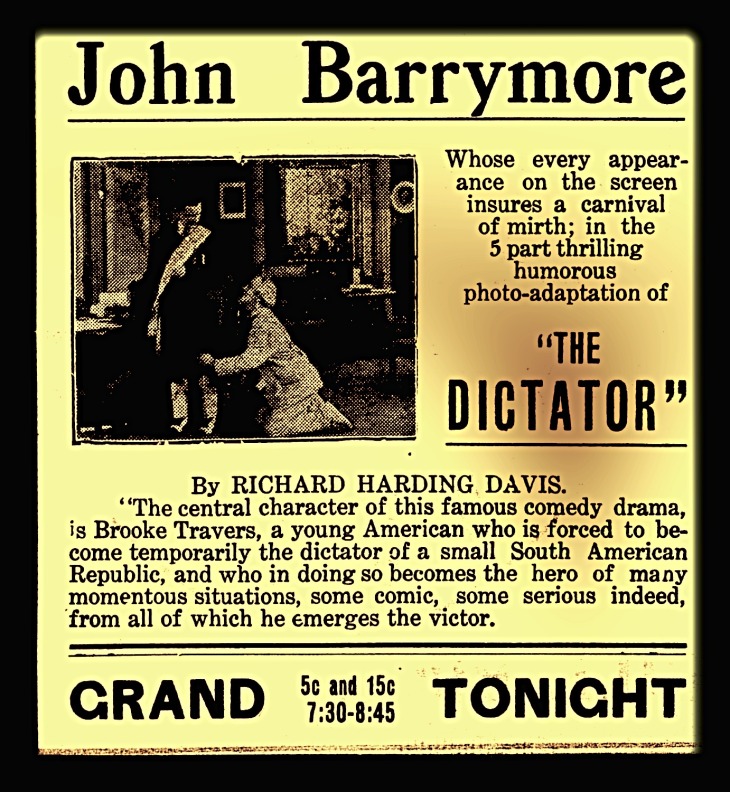 In 1906 John Barrymore was an exceptionally handsome young actor who had been nicknamed The Great Profile. He was not just the Brad Pitt of his day, he was also the Laurence Olivier; an unfair combination of handsome and talent. He also had a bit of the George Clooney and the Richard Burton in him; a notorious ladies man and a drunkard. Also like Burton, he was well known for making any Shakespearean role he undertook his own, imprinting a unique theatrical vocabulary upon every role from Romeo to Hamlet. It wasn’t Shakespeare’s immortal artistry that brought Barrymore to San Francisco in the middle of April 1906, however, but a now-forgotten play called The Dictator by Richard Davis.

At the same time, the man often regarded as the greatest opera singer who ever lived also happened to be in San Francisco during that April over a century ago. Enrico Caruso was in town to perform in Carmen. Rehearsals for the performance of April 17 had not gone well. The hefty Swedish singer playing Carmen had not been at the top of her game, and a stagehand had accidentally broken a prop. Caruso, a man nearly as superstitious as a baseball player, was convinced the night’s performance would be a disaster. In the audience that night was none other than John Barrymore. Today it would be as if Johnny Depp was in town for a concert by Justin Timberlake.

Man, for some reason I just suddenly got really, really sad.

At any rate, the performance of Carmen wasn’t a disaster and afterward both superstars went their separate ways, possibly without even meeting. What John Barrymore actually did upon leaving the opera house is up for interpretation, but based upon past history most believe he found some delightfully willing female company and a bottle or four. As for Caruso, he stayed up until the first newspaper reviews hit the streets and didn’t finally get to bed until after three in the morning. Caruso was used to such hours, often sleeping until after noon. The night of April 17, 1906 would afford Caruso no such luxury on the morning of April 18, however. Shortly after 5:00 AM, or about two hours after Caruso went to bed, the entire city San Francisco rattled and hummed as the most devastating earthquake in American history turned much of the city into ruins. The stories of what happened when the two most famous people in the city responded to the great San Francisco earthquake vary wildly depending on who told it. It has been said that John Barrymore actually slept through the earthquake. Almost equally famous Diamond Jim Brady spread stories afterward that he later came across John Barrymore dressed to the nines outside the St. Francis Hotel where he was doing his part in the healing process by handing out free cognac to an audience that mostly consisted of beautiful women. Others say Barrymore was put to work helping to dig survivors from beneath the pile of rubble of his own hotel.

The stories about how Enrico Caruso handled the earthquake are even harder to pin down in the search for truth. Caruso was already disheartened by San Francisco, considering it to be a town populated by the offspring of Cletus and Brandine from The Simpsons. By all accounts, Caruso’s initial reaction was pure hysterics that included prolonged periods of crying. According to some, Caruso wandered the city like a zombie barely dressed at all; other say he was dressed in full diva regalia, floor length mink coat included. Some reports have Caruso taking a nap in Union Square while fires raged all over the city. Others swear that merely walked in a daze uttering to everybody or nobody that San Francisco was one hell of a town.

Kind of makes one wonder how Johnny Depp and Justin Timberlake would react today.