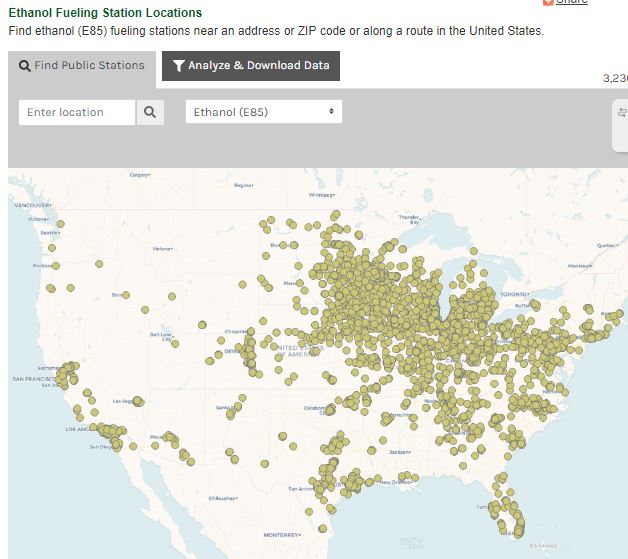 E85 ethanol is one of the next big things for protecting the environment from the ravages of automobiles. What is E85 ethanol? It is a blending of 85 percent ethanol and 15 percent gasoline. Proponents of E85 point to the fact that it burns more efficiently because it contains more oxygen than the gasoline that fuels most cars. The downside is that unless you have what is known as a flex-fuel vehicle you can’t take advantage of all that E85 ethanol has to offer.

If you want to know how to run your car on E85 the first thing you’ll need to do, therefore, is check whether your current vehicle is flex-fuel capable. This can be done with a simple internet search that will return all the major vehicles that are flex-fuel efficient. If your car qualifies, then you can rest assured that that it can run on 100% E85 as well as a combination of E85 and standard gasoline. The real problem isn’t so much finding a flex-fuel vehicle as it is finding a gas station that offers E85. The good news is that since automakers have really taken up E85, there has been a significant increase in the number of gas stations across the country where you just pull up and start pumping away. The bad news is that despite that increase, the actual number of E85 pumps are still few and far between. It is estimated that only around 1,500 gas stations nationwide carry E85. And most of those that do are still confined to the Midwest. A few states still don’t have any gas stations that carry E85 and the worst place to live if you want to find a gas station near you that will allow you take advantage of your flex-fuel vehicle is New England.

E85 ethanol is more environmentally-friendly, but what about actually saving you money if and when you do find a gas station that carries this alternative fuel? The price of E85 compared to regular gasoline varies widely. In the Midwest where all those competitive pumps are located the price of E85 is typically below that of gasoline, often up to thirty or forty cents cheaper. On the other hand, the unsteady stream of supply and demand in those areas of the country where competition is not as fierce E85 ethanol can actually cost more than gasoline. Another unpleasant problem associated with ethanol is that it actually costs more to distribute ethanol than it does gasoline. Since traditional pumps can’t be used for E85 ethanol due to its corrosive effects, all new pumps have to be built.

Unless you can find E85 ethanol that costs less than gasoline you may not have much inspiration to search for a flex-fuel vehicle, however. While you can feel good about protecting the environment by driving with E85 ethanol, the sad truth is that it isn’t an alternative fuel source designed to get you better mileage. On average, you can expect to get somewhere between 20 to 30 percent less mileage per gallon using E85 than standard gasoline. Obviously, if burning a cleaner fuel means less than saving money, there’s not a huge draw to buying a flex-fuel vehicle if you can’t be assured of saving money at the pump.

Making the switch to a flex-fuel vehicle that runs on E85 ethanol is really, therefore, more of a statement about the desire to save the world rather than a desire to save money. Although the potential for saving money is definitely there, especially for those living in the Midwest, running your car on E85 is actually more of a grand gesture that shouts to the world that gasoline business as it has always been is a thing of the past. Things have to change. Quickly and for the better. Peace of mind may take longer to appreciate than a thicker bank account, but it usually lasts much longer and driving a car with E85 ethanol will definitely bring you peace of mind.